Some projects – selected under the competition – for improving employment opportunities as well as the social and economic situation of multi-child families living and registered in Kutaisi were supported financially by Kutaisi City Hall within the project “Support the multi-child families” in 2019.

The implementing organization “Fund of Women Entrepreneurs” of which main direction has always been “Women’s Economic Empowerment” was also selected through the competition. The Social Affairs Service of Kutaisi City Hall was assigned to organize monitoring of project implementation,

7 projects were selected within the project “Sustainable economic strengthening of multi-child families living in Kutaisi through the development of their own business.” on the basis of studying relevant skills and knowledge. One of the goals is starting a micro and small business or expanding the existing one.

Megi was provided with the implements worth of 2000 GEL within the project, she has worked smoothly, but due to the COVID19 in Georgia, the number of orders for indoor decorations has decreased, but as for the orders for the outdoor decorations- they have increased. Also fresh flowers have been successfully sold via pre-orders.

Megi Nizharadze once mentioned “I managed to expand my business under the project.  New ideas have come up and the prolongation of this project is necessary especially for the multi-child families, as even a small amount of support is vital for more development of the business”. 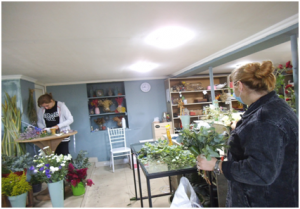 Lela was funded with the implements worth of 1200 GEL. She expressed a great gratitude and noted: „A washbasin was purchased with the support of Kutaisi City Hall and Fund of Women Entrepreneurs, that made the service easier and much comfortable for customers as well”. 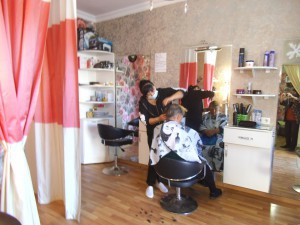 A sewing machine worth of 2000 GEL was purchased for Irine within the framework of the project. Because of the pandemic situation a sewing factory stopped working but after the getting permission it continued doing the job. She sewed and hired children’s holiday costumes including dance costumes and Chokha-Akhalukhi.  At present she also sews women’s clothes. She express her gratitude for the high quality machine. She is also glad that the number of orders have increased. 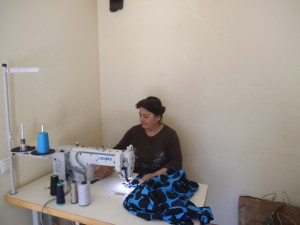 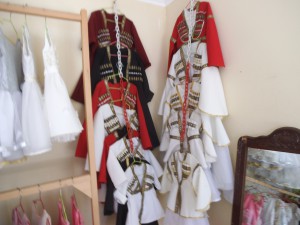 Under the project, the confectionery was funded with the inventory worth of 2 500 GEL.  Because of the pandemic situation orders were lessen but all the staff was retained. At present, the productivity has increased by 30% and 2 persons have been employed. The  baking space has been expanded and repaired and 2 more bakers will be employed in a near future. The range of cakes have increased as well. 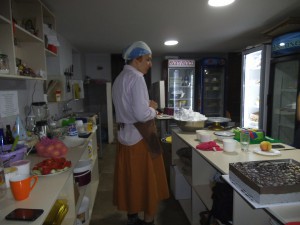 She was provided with the baking implements worth of 1634 GEL within the framework of the project that effected positively on the quantity and quality of products. The space was expanded and repaired by 5m2, so 2 more persons were employed. Everyday income has increased by 200 GEL. Once she said: “I am very grateful with the funding, it was a great support for me“. 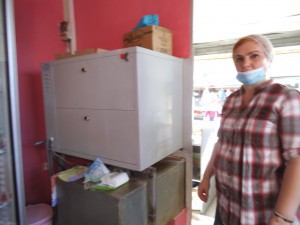 All main equipment of suspension parts (worth of 4000 GEL) necessary for repairing cars were purchased under the project. He had to stop working because of the pandemic situation in Georgia but now because of the high demand of the service and after the betting permission of opening he carried on working. 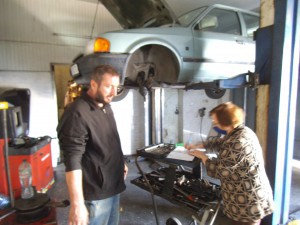 She was supported with the equipment worth of 2830 GEL. During the pandemic situation she worked full-time, moreover she had orders for the Puppet and Mask Theaters. She also modeled sketches of stand-candles and she supposes that they will be successfully sold. Marina is also an invited teacher in the Fund of Women Entrepreneurs to teach the young making and modeling national dolls. 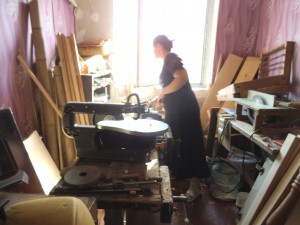 Kutaisi Municipality and Fund of Women Entrepreneurs  wish health and success to our multi-child families.

Today’s world is facing many challenges that are related to the basic human rights. Among the top agenda of today’s problems are the issues of gender equality. These issues are significant not only from the viewpoint of justice but also from the perspectives of pure economic efficiency. In places and in countries where men and women have equal possibilities of using their abilities and resources are usually better developed countries than others. Such an outcome results in sustainable economic growth and development. This relation and the priority of the question is acknowledged in Georgia and in Ukraine. Gender equality issues are included as the reformation direction in EU association agreement.

On 15th of July, 2016 was held the international conference: Issues and current challenges of Gender Equality policies. The conference was held within the project: Gender Policies and EU Integration – Experience of V4 for EaP Countries. Covering the challenges of gender equality policies in Ukraine and in Georgia the main focus, on the side of policy improvement, was made V4 countries experience. Experts from Visegrad courtiers were presented at the conference, namely the following experts and representatives of the think tanks:
Slovakia – Institute of Sociology, Slovak Academy of Sciences;

Czech Republic – „Gender Studies, o.p.s.“;
Poland – Institute of Sociology, Jagiellonian University;
Hungary – „Hungarian Women’s Lobby“.
From Ukraine representatives of Gurt Resource Center have outlined the current situation and challenges of Gender equality in Ukraine. The conference was attended also by the representatives of local foreign embassies and international organizations, independent experts and researchers from academic institutions and think tanks. The main publication of the project covering the EaP reality in gender equality issues and experience of Visegrad countries can be accessed at the following links: http://fwevisegrad.ge/
Project if funded by the International Visegrad Fund (www.visegradfund.org) and implemented by the Fund of Women Entrepreneurs.

On 12 November, 2005 year in frame of project: “Gender Policies and EU Integration – Experience of V4 for Eap Countries” held first radio program in Kutaisi radio “Dzveli Kalaki” broadcast.
The guests of radio program were: project’s coordinator Elena Kuparadze and involved expert in a project – Maia Kuprava-Sharvashidze.
Project is funded by the international Visegrad Fund.
Recorded radio program can be accessed from the following link:
Radio programm

Methodic of business plan making for beginner businesswomen, how to start “Our Own Business and How to Make a Business Plan”.
At the end of working day participants’s works were summarized and all were given certificates.
Participants had adopted essential skills during trainings and they concluded that they will definitely participate in the grant competition in order to establish a strong NGO.
The training participants we handed certificates and future training was planned together on the topic:” Active citizen, how I support changes in local self-government budget” .The date for next training was nominated t be October 7.

The women from Mountains 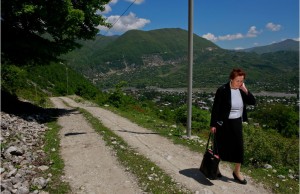 Every day, Nani Managadze walks three kilometers of a difficult road from her village Gveso to Tsageri, the administrative center in the Lechkhumi region, north-west Georgia. Like in other Georgian highland villages, the so-called marshrutka minibus travels from Gveso to town Tsageri only once a day, departing at 9:00 am, often with an insufficient number of seats for all the passengers. Besides worrking as an accountant in a ramshackle sport school in Tsageri, there is an additional reason why the 60 year-old women vigorously walks every day to town: for the past several mounth, she has been a memeber of the Women’s Regional Union of Lechkhumi, an NGO that unites local women who want to make a difference in their communities.
It all began when Nani was approached by a representative of the Fund of Women Entrepreneurs from Kutaisi. The organization had just received a grant to implement a project on women’s economic empowerment in mountainous areas, supported by the Delegation of the European Union to Georgia and UN Women. As one of the beneficiaries, Nani underwent several trainings, including on entrepreneurship, lobbing, advocacy, active citizenship and women’s rights. inspired and empowered, together with other women volunteers, she founded the Women’s Regional Union of Lechkhumi, the first NGO in the region. “Being the first is a huge responsibility. We are still learning but I am happy because many women now wish to join the organization”, says Nani.
Women residing in remote mountainous areas in Georgia have specific needs and numerous problems. Difficult social and economic conditions, coupled with limited livelihood and job opportunities, force any, especially young people, to travel to the capital in searched of a better future. Moreover, the traditional environment does not empower women to speak out: “Do you know how people think here? A women should be obedient and do as she is told. The project showed us different light, gave us a divergent role and instilled self-confidence in us. We now want to become visible and help other women to overcome their insecurities, become more active and participate in the community life”, Nani states.
Nani is aware that uniting the local women and registering their organization is only the first step on their long road to empowering the mountainous region. Bringing about real change in their lives also calls for interesting initiatives. Nevertheless, she is not afraid and has a multitude of ideas on how to chieve this goal. According to Nani, “Products in Lechkhumi and neighboring Racha are environmentally friendly. The fruit is of superior quality, but is almost always left to rot. I would like to build a small processing plant to produce dried and canned fruits, which would also employ socially vulnerable people. I frequently imagine myself working in such an enterprise. Perhaps, we can make it work”.
The founder of the new NGO has another wish: the old sport-school where she works, begs for a significant facelift. Nani wants the youngsters living in Tsageri to lead a healthy and active life and have the place to socialize. She knows that this would also require money and srtong voice in the community.
The Women’s Regional Union of Lechkhumi will organize the first official presentation of their project ideas to potential donors and the community in September. They want to establish a name in the region as that of an organization capable of bringing about real change. They have determination, strong will and ambitious plans . . . but before they embark on their long journey, nani still need to walk those three kilometers back home.